How to Negotiate: The Top 5 Sales Negotiation Strategies

As salespeople, we know that our leads are looking for the best deal along with the best quality product. However, you can’t just give your product away for nothing. That is why knowing how to negotiate is so important.

In your product demo, you probably gave your prospect a brief look into the pricing options. The next step they want to move on to is negotiations. Ideally, you would like to sell your product at the highest possible price, but not every situation allows for that. Negotiations are necessary to keep the customer happy and still bring in revenue.

In this article, we will supply you with all the tools and techniques needed to maximize your negotiations and thus your deal size. 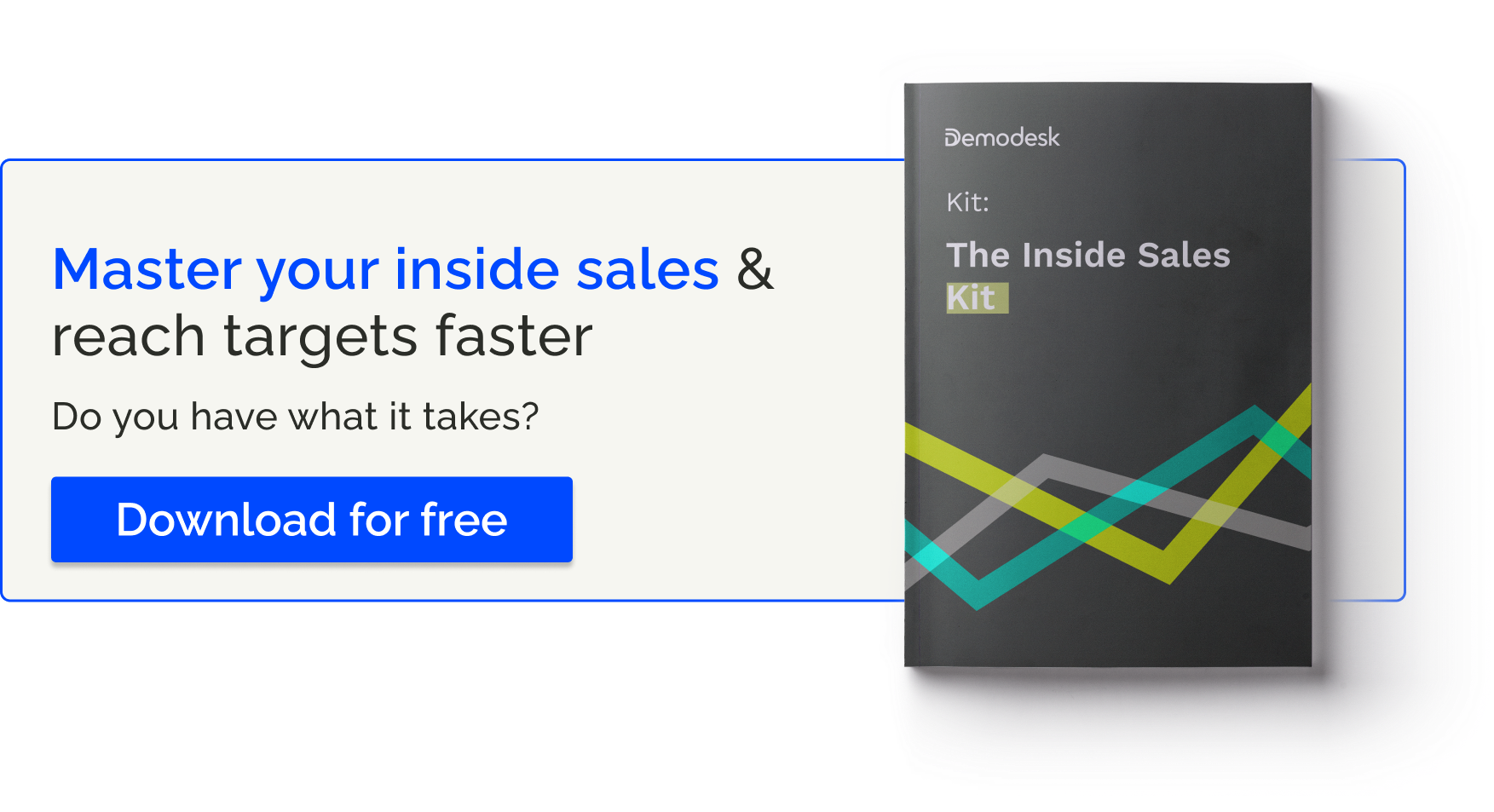 What is a sales negotiation?

Being in sales, you know that a big part of your job will be to conduct successful negotiations. You are expected to represent the best interests of your company and maximize the contract value of each deal.

But negotiations are often seen as tense and conflictual moments in a conversation.

So, what is a sales negotiation?

According to Chris Voss, author of Never Split the Difference and former FBI hostage negotiator, negotiation is a collaborative process in which several parties are faced with different aspects of the same problem. Your job is to work with the other party to solve that problem together.

When I read Never Split the Difference for the first time, I was shocked at how wrong my understanding of negotiation was. To me, it was a painful, uncomfortable situation in which my counterpart was trying to squeeze my commission check.

Over the years, I have experienced, learned, and developed a few techniques to maintain control of negotiations while helping both parties solve their side of the problem. Here are some of the most valuable sales negotiation strategies to use.

How to negotiate using the good cop/bad cop strategy

The good cop/bad cop negotiation strategy is mostly used in justice interrogation and has been depicted in countless movies. It’s a psychological tactic that involves two interrogators, taking opposite approaches to extract information from a suspect. However, that doesn’t mean it can’t be applied to your sales process.

This might sound extreme but in a business sales negotiation, the core concept is similar. The idea of this strategy is to work as a team, often including the sales rep and his manager. In this duo, one of the participants will systematically refuse any compromise asked by a prospect, typically a discount.

The second participant will be more open to the negotiation, be willing to listen to the point of the prospect, and try to find a compromise where both sides can benefit.

To give you an example, here is a story of how I used this technique when I was selling testing services.

It was the last day of the quarter and my team was fighting to get 10 contracts signed by the end of the day. One of the prospects was telling us that it was impossible to sign the contract that day with the conditions we were asking for.

My colleague who was the deal owner had been working on this account for months. He was annoyed with the behavior of his prospect after all the work he had put into the deal. We jumped on a call and the conversation immediately got tense. My colleague and the prospect were arguing over deliverables and contractual details. He was playing (unconsciously) the bad cop.

I saw an opportunity to save the deal, taking the good cop side, and applying this negotiation strategy to an already escalating call.

I asked the prospect: “If we can solve these two specific contractual points, would you be able to get the contract signed by the end of the day?”. In doing so, I was offering to cut a deal with the prospect, solving two sides of the same problem. My prospect wanted better terms and I wanted to close the deal before the end of the day.

The prospect said yes and my colleague started fuming (unintentionally, of course), reinforcing that the deal I was proposing was fragile. This required a swift answer on my part.

We ended the conversation, saying we would need to verify if we could give our prospect more favorable terms. Of course, we compromised by giving better terms but ended up closing the deal that same day.

How to negotiate using “I need to ask my manager”

The “I need to ask my manager” negotiation strategy is by far my favorite. The idea is to put the decision regarding a compromise in the hands of a third party. The goal here is to frame the situation to your advantage and take control of the sales process by giving yourself more time to create a game plan.

“I need to ask my manager” example:

If a prospect is asking you to concede a product discount, or any kind of compromise, systematically answer that you need to get approval from a third party (typically your manager).

When you do that, you give the prospect the expectation that the decision is not in your hands. It might actually be the case, but even if you can make that decision yourself, you frame the situation to your advantage. You will then be able to set the timeline of the negotiation and work on a counter-offer.

If you directly accept the discount or compromise, you lose the opportunity to come back with a counter-offer and the possibility to get a better deal.

Even though this strategy can be very helpful for negotiating a sale, it typically works much better in inside sales when you don’t have as close of a relationship to the prospect, in comparison to outside sales. It might be a little off-putting if you have been telling a prospect that you are the head of sales at your company but you have to ask your manager for the go-ahead on the product terms.

How to negotiate using Mirroring

The mirroring negotiation strategy has been formalized by Chris Voss. Mirroring consists of repeating the last 1 to 3 words of a prospect with a downward or upward intonation.

As simple as it looks, this technique is one of the most powerful communication tools you can use in sales negotiations. It helps your prospects open up, find other words to explain a situation and paint a clearer picture. When these prospects further elaborate on the topic at hand, it is easier to understand what they are thinking, what they want, and what they really need. With these areas cleared up, you are easily able to find a compromise or a way for both you and the prospect to get what you want.

This sales negotiation strategy can also be used with open-ended questions like “What do you mean by that?”. However, it is more powerful than asking a direct question, because it is hard to detect. It is therefore very convenient to use with seasoned buyers.

Prospect: “I think your solution is too expensive.”

Prospect: “Yes, we don’t have the budget for this software.”

Sales rep: “Just for this software?”

Prospect: “Yes, Google Hangout is enough for us.”

Of course, this is a very basic example of mirroring but you could go on forever like this. Observe how much information you have gathered by simply repeating the last 1 to 3 words of your prospect. In this example, you can see it went from “It’s too expensive” to “Our free tools do the job for us”.

This technique allows you to get additional information, which can be used to build other use cases and find another angle to the problem.

How to negotiate using labeling

Labeling is another negotiation strategy developed by Chris Voss. It is a great way to diffuse a tense situation. The strategy has you describe the situation and address the elephant in the room. Sometimes the best way to deal with a difficult situation is to address it upfront.

Lead into this technique with “It sounds like” or “It seems like” and then describe the conflictual situation. If you start labeling with a more accusative phrase, like “You are” or “This is”, there can be more backlash since you are making an outright statement. If you structure it with an assumed point, they are much more likely to react more calmly and give you the reasoning behind the situation.

A few months ago, I was on a coaching call with a sales rep and it suddenly got tense. I could feel something was bothering her, but I couldn’t figure out exactly what. We were discussing different things to change in her outreach strategy, so she could get more answers as to what needed to be altered in her sales processes.

But every time I was asking about her approach or suggesting new ideas, she kept telling me she knew what she was doing. Her answers were short, passive-aggressive and we were going nowhere.

So I used the labeling technique.

I said: “It sounds like you don’t believe I can help with your outreach.” and things drastically changed. She opened-up and started telling me that she had 20+ years of experience and she knew what she was doing.

She also started saying that the tips I was giving were great, but she wasn’t certain they would work for her. She’d been selling physical products to people all over Europe and she had a very aggressive selling style that worked for her previous industry.

After a few minutes of speaking, she finally agreed to try a few of my suggestions. By opening up a dialog with the labeling technique we were able to cover more ground and see how she could reach her goals, even if she didn’t see the benefit at first.

By neutrally addressing the standstill with “It sounds like”, I offered her a safe way to express what she was thinking.

Remember, the goal of a sales negotiation is to solve different aspects of the same problem. Labeling is a great way to do that.

How to negotiate using Non-monetary offers

We often forget that a deal doesn’t have to always be negotiated solely in monetary terms. When negotiating a contract, try to think of valuable items you could exchange with your prospect. This can act as a compromise but still keep the revenue rolling in.

One of my first managers used to call these offers “Bonbons”. The idea is to use a technique similar to the one used in retail when you get two items for the price of one.

One example that I use regularly in sales contract negotiations is to offer an additional 2-hour workshop to prospects who are hesitating to sign for a full-day sales training upfront. In general, I will charge both for the workshop and the training, but if my prospect commits to a bigger contract upfront, they get a free workshop, for the same price.

There are countless ways to negotiate with non-monetary offers. If you have a good understanding of the problem that your prospect is trying to solve from the discovery call or product demo, you will be able to come up with a great strategy for navigating the sale negotiations down the line.

How to negotiate in a nutshell

As a best practice, you will get more out of your sales negotiations if you really know your prospect. This means you should use the time in your discovery calls and product demos to learn as much as possible about them. Then, when you go into sale negotiations, you will already know what to expect.

Thibaut Souyris is the CEO and Founder of SalesLabs, a B2B sales training and coaching company, based in Berlin. He trains and coaches B2B sales teams to start more conversations and close deals faster. He is also the co-host of The B2B Sales Podcast.

Make the most out of every customer conversation.